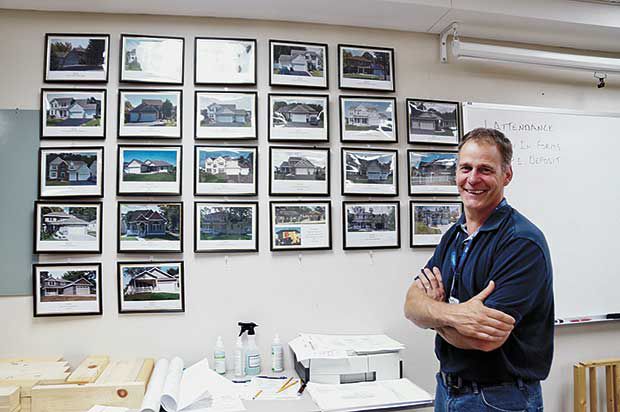 “We have learned all about the foundation,” said Luke Jeska, a North St. Paul High School senior enrolled in the construction occupations program at the District 916 Career and Technical Center in Mahtomedi.

Students spent the first weeks of the course in a classroom at Century College, learning about safety while the concrete foundation was laid by professionals. Now, students are building onto the foundation of a future real home with insulation and wood at the direction of their teacher, Tom Spehn.

The house should be completed in June by the students. Spehn started the program in 1999 with a trailer and no classroom, he said. It all began with 28 students who built a home in Vadnais Heights in partnership with a developer.

Within three years, 90 students were in the program and developers had a pool of potential workers.

“It was really spearheaded by business and industry,” Spehn said. The developers Spehn worked with for the first decade supported the program. When the housing market crashed in 2008, Spehn developed a partnership with North St. Paul to revive its condemned houses. The city basically breaks even but neighborhoods are revitalized. The 24th home built last school year sold for about $300,000.

Other students also work on the homes. Century College interior design students work with suppliers on the interior and St. Paul College cabinetry students do woodwork.

A variety of career paths sprout from the construction program.

“It’s made me think about what I can do after school instead of going to a regular four-year college,” Jeska said. He’s considering a technical college with a program in airline drone maintenance, he noted.

Stillwater High School senior Carl Tomlinson said taking the course has opened his eyes to the trades. He is interested in becoming an electrician or electrical engineer. He will have the chance to learn about the electrical work professionals will do on the house he is helping build, he noted.

One former construction student went to college and is working for Disney World designing rides, Spehn said. Another started his construction career right away and didn’t incur any post-secondary debt.

“He was so successful that by age 25, he was able to purchase a $260,000 home built by students who walked in his footsteps,” said District Communications Coordinator Syreeta Wilkins.

That student was Frank Pederson, who graduated from Roseville High School in 2010 after spending two full years in the construction program. He landed a job offer before graduating.

“I graduated Friday and started Monday,” Pederson remembered. Having two years of experience building two houses from the ground up landed him the work. At the time, he felt like not going to college meant he was a failure, according to the culture of education.

But now he feels like he is ahead of the game. Friends of his who went to college are still living with their parents and have thousands of dollars in student debt. His wages are also higher than theirs. He has worked in roofing and framing, and has installed windows.

He purchased a house made by students who followed in his footsteps by accident — he was looking at another house in North St. Paul and drove by it.

Pederson was led to the program by a knowledgeable wood class teacher and school counselor.

“The whole book study thing never worked for me,” Pederson said. “I was hands-on.”

Unfortunately, he was the only student from Roseville in the program at the time. He thinks a lot of his friends should not have gone to college and that college is pushed too much in high school.

“It is not for everybody, and I am super glad I didn’t go,” he noted. “I would not have gotten anything out of it except for a bunch of debt. Everybody doesn’t need to go to school for a job.”

He hopes more students can hear about the program.

“I can’t imagine my life today without that program and where I would be,” he noted. 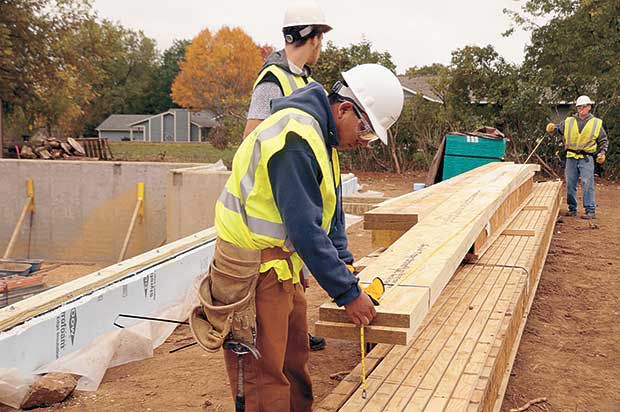 District 916 offers training for a variety of careers

During the 2015 to 2016 school year, students earned 2,700 college credits at Century College and other post-secondary institutions.

“There are programs here for every student,” Wilkins said. “I think there are misconceptions out there that the four-year degree is your only path to success.”

Unlike PSEO (post-secondary enrollment option), the Career and Technical Center has classes that are made up entirely of high school students.

Students who find they enjoy a certain class can continue in similar classes at Century College after they receive their high school diploma. In many cases, they simply move to a larger classroom next door to the high school classroom. For example, the cosmetology, dental program and auto programs in the District 916 Career and Technical Center are located right next to a sister program at Century College.

Students can shave off half a year of the Century College cosmetology program by beginning while they are still in high school, Wilkins said.

Some students can even get professional jobs right after graduating from high school — or before they finish.

Auto teacher Matthew Field said he received three phone calls within one week this fall from automotive employers asking if he has students interested in work. About 15 percent of his students already have jobs, he said.

Another example: graduates of the EMT program can be hired as an EMT or take further post-secondary education to become a paramedic, Stewart-Kellar explained.

Some students come for one interest but end up pursuing another.

The District 916 Career and Technical Center has 20 programs for students. Its animal science program, where students take care of all kinds of animals from guinea pigs to goats to exotic birds, is unique in the metro.

“We are a hidden gem that doesn’t want to be so hidden,” Stewart-Kellar said.

District 916 is an intermediate school district that offers shared programming to member districts. The Career and Technical Center is one of those programs.