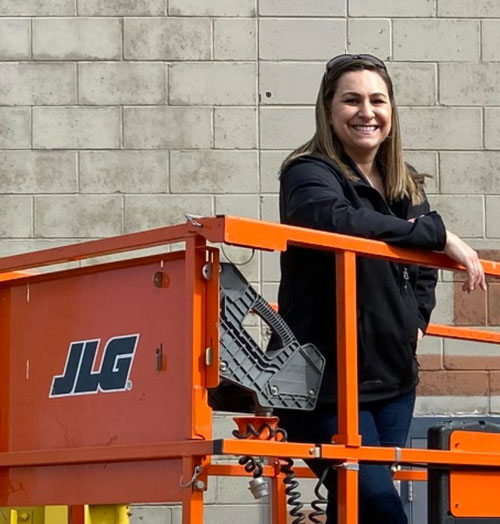 Although Oesterreich started her career in the administration/accounting department, she was encouraged by a previous employer to get into the field selling construction equipment.

“I got into this by complete accident,” she said. “I come from a family of electricians and carpenters. I did not grow up on the job site.”

Oesterreich worked for six months for her father’s employer, OlympiaTech Electric, in the administration/ accounting department.

When the company began downsizing, Oesterreich started looking for something new.
“I am glad because I would never have found the trade,” she said of starting work with Beaupre Aerial Equipment in 2005, which was later purchased by Sunbelt Rentals.

Oesterreich was asked to join the sales department in 2006. Since 2015, she has been working for RMS Rentals out of Savage, Minn. If someone had told her she would be working in the construction industry as a heavy equipment salesperson and training career professionals to use the equipment, “I would have told them they were nuts.”

Her old employer showed her the ropes, introduced her to the clients, and encouraged her to seek new clients.

Oesterreich had entered an industry that only had two other women in it.

In the beginning she had dueling thoughts about working with the heavy equipment.

“It was intimidating and exciting getting to know the equipment,” Oesterreich explained. But while it was exciting, she kept saying to herself “you’re nuts. This is insane.”

“I had a lot of support from family and friends Now I brag about my job all the time.”
As she travelled from job site to job site, making sure her customers had the right equipment, Oesterreich faced some challenges.

“You have to know all of the equipment and how it is used. And deal with the elements,” she said.

And the guys did test her way more than her male counterparts. While some of the guys could have really thrown a wrench into her day, no one did that, Oesterreich said.

“I certify guys that have been using the equipment longer than I’ve has been alive,” she said.
Oesterreich is also there to answer any and all questions her clients have about the equipment. Because she knows how to operate the equipment, clients will call her at all hours of the day about the equipment operation, she said.
In an industry where they are talking people out of retirement, “it is a shame there are not more women in the industry,” said Oesterreich.

“Now I wish there was something I could do to encourage more woman into the industry. It is still so rare to have woman or people of color on job sites.”

One of the first pieces of advice she gives is “don’t be intimated by it. Don’t overthink it.”

Oesterreich encourages women to talk to people on the job site to see how to get involved in it.

While there is so much to learn, it is a lot less intimidating than working on cars, Oesterreich said.
Women are not tapped into as an industry resource and Oesterreich thinks they would have a lot to give to the industry.

“I would love to find a woman who wanted to work as a heavy equipment mechanic,” Oesterreich said.
“The stigma that it is dirty and (people in the field are) not successful is a crock.”

“Be confident. You don’t need to know everything about the machine. Anyone can do it, but it is not a male exclusive trade,” said Oesterreich.